Knit on the Train Wrist Warmers

I don't go on the train very much these days, but when I do I like to have something to do while inhaling the scent of other peoples' Burger King purchases and waiting for my infernally hot tea to cool down.

The other week we went to see 'Bright Phoebus Revisted' - a celebration of the songs of Lal and Mike Waterson (if you don't know who the Watersons are, there is a great article here at Proper Music). It was at the Barbican in London, and it was amazing. After I had sorted out a nearly night scuppering babysitting situation - you can't get from here to the City of London in 2 hours - I grabbed a skein of something and a set of dpns, threw them in my bag and we set off for the station.

I knew I had enough with one skein of Mirasol K'acha (which I think may be discontinued) to make a pair of wrist warmers on my 4mm dpns,  probably. What I didn't have was a pattern, so I decided to just see what popped into my head as I went along.

Mirasol K'acha is Merino/Suri Alpaca/Silk blend, so it's really shiny, with a little bit of halo hairyness:

I cast on 36 stitches at Didcot and carried on until I had 9 rounds of 2x 2 rib. I did some stocking stitch for a bit and decided it needed a bit of variety, so did a round of yarn overs for eyelets. I did them again a few rows up after a bit of un-knitting and re-knitting, because didn't like the proportions.

A few more rows of stocking stitch I thought why not some more ribbing next? And then do the sequence all over again until I get to the rib at the hand end (having started at the wrist end).  That's how far I got by the time we arrived back home very much later that night.

When not on the train any more I cast off in rib (12 rounds this time) with a bit of increasing in the thumb area to make room for the wrist warmer to sit comfortably round the widest part of the hand, and made the other one - at this stage I realised I should have written down what I'd done as I went - but in this chunky yarn it's pretty easy to count rows so it wasn't a complete nightmare. I've ended up with a pair of snuggly teal wrist warmers, and I'm really happy with them

The combination of ribbing and eyelets have given these a nice texture I think: 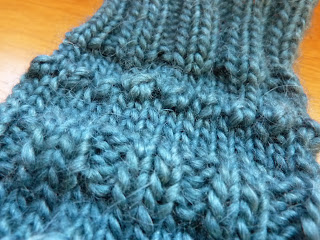 They look quite good on too:

The beautiful book I'm hiding behind is called 'teach me to be a summer's morning' and is a collection of Lal Watersons songs, paintings, drawings and knitting patterns put together by her daughter Marry.  It's as amazing as the gig was, and comes with a CD of previously unreleased recordings.

These wrist warmers are not itchy at all and really warm (the green jumper you see pictured here is itchy, but I like it so much I put up with it, even though it's a shop one):

So there you are, my extremely complex design process which basically consists of 'winging it'. These are not a highly original or innovative piece of knitwear, and I've have been influenced by all the patterns I've knit in the past; most definitely by Mary Heather Cogar's Simple Things shawlette, which I made a few years ago.  However I'm pleased to find I can wing it - on something other than a plain sock, or scarf like thing - without the safety net of a pattern.

You can get 'teach me to be a summer's morning' from Fledg'ling Records
Posted by Fi at 5:16 pm