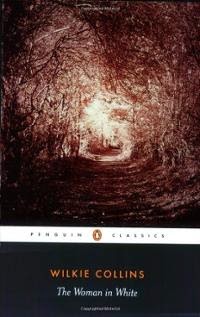 I've been reading 'The Woman in White' by Wilkie Collins which, in case you don't know, is a very long Victorian sensation fiction novel about a young woman falsely incarcerated in a lunatic asylum, a very secret secret, a criminal conspiracy, unsettling and shady characters aristocratic and otherwise (some of them foreign) and a bit of romance. Also, there's a bit that'll make you jump out of your skin, or at least make it creep a bit. I can't understand why it's taken me until this great age to read it, as it's just up my street.

It was originally published in series form in Charles Dickens' magazine 'All The Year Round'. I can completely understand the anticipation of the readers as they waited for the next episode to appear - I should think on a par with the experience of waiting for the next 'The Killing' episode on BBC4 on a Saturday night.

I'd have quite liked to read it in that episodic way, but when presented with an Entire Book it proved impossible to stop, though I did once fall asleep mid-epoch with the paperback on my face (this is not uncommon, I admit, and much more comfortable than falling asleep with a first generation Kindle on your face). It's written in the from of 'reports' by major and minor characters, and you find yourself trying to put together what happened for yourself, which I think makes it all the more gripping.

If you get the Penguin edition it has a very good introduction by Matthew Sweet, in which he does helpfully tell you to read the second half of the intro after you've read the novel (does that make it an outro?) so you don't spolier* yourself at the start. Thank you, Dr Sweet.

When you do read the end of the introduction you're presented with all sorts of other unsettling questions about the motives of the narrators - and one in particular - so you have to think about scheduling in a second read of it. Anyway, if you like a fright, a mystery and a long Victorian book I can recommend it.

I'm going to read Collin's 'The Moonstone' after I've read 'We Are All Completely Beside Ourselves' - which should be read on the basis of its excellent title alone, and not simply because a friend recommended it by practically grabbing me by the throat and making me promise to read it so we can discuss.

*which makes me wonder, did Victorian people go about avoiding society or not reading their mail, in case they overheard something they had not yet read?.

In knitting news I have undertaken  the Kaffe Fasset Rowan Yarns Knitalong. I am not up to week 5 yet, but I do have some lovely squares from weeks 1 - 4:

I am doing the turqouise version, I love the yarn and am already thinking about cosy jumpers made of it (it's completely non-itchy). However I am already dreading sewing it all together. I can sew it together over Christmas though so at least will have access to daytime wine.

I don't usually do KALs, and I had kept up until very recently. If the typeface on a Penguin Classic was a bit larger I may have been able to knit and read simultaneously, but it isn't, so instead I have become horribly addicted to 'Grimm' on Netflix, which is much easier to knit to, despite the beheadings.

Grimm is basically 'Buffy the Vampire Slayer' with more variety in the monster department. The 'Buffy' part is a cop called Nick, and one of his sidekicks is a vegetarian werewolf called Monroe (he's very deadpan, I like him a lot) rather than a witch. It's all very entertaining and set in Portland, Oregon - someone was ripped to pieces by a monster outside the very Rothko exhibit we visited a couple of years ago.