A Finished Thing - Foolish Virgins Pillow  (if that's not the correct translation to Norwegian up there then it's Google's fault).

My obsession with all things Scandinavian seems never to lessen, not only do they do a good crime drama, have peculiar cheese and lovely scenery, there's also of course a  fantastic knitting tradition.


A few years ago I bought a book called 'Norweigian Handknits', which is not from Norway at all but output of  the Vesterheim Norwegian-American Museum  in Decorah, Iowa. I'm not at all disappointed by this, being able to imagine a museum full of  Garrison Keillor characters as well as all the lovely things (yes, I know his American Norwegians all live in Minnesota, but Iowa's the next state down. And if FARGO is anything to go by, Minnesota looks a bit dangerous).  The book is filled with knitting patterns inspired by textiles in the museum, I pretty much want to make them all !

I had my eye on the Foolish Virgins pillow for a while, in the book it's done in reds and greens, but the magic porridge pot of yarn overfloweth, so I decided to recolour  it in greens and blues (and purple):

It was pretty tangly knitting, a number of rows had really long floats in them, and trying to twist the yarn to catch them in made it worse.

So knitting this side was a pretty slow job, but the end result well worth it, AND once it's finished you can suddenly see ALL the Virgins!

Here is is before blocking, see how wibbly wobbly it is? Colourwork looks so crap before it's blocked I often think it's gone Horribly Wrong:

Now, in the pattern it asks you  to make the back of the pillow out of fabric, so being a glutton for punishment I decided I wouldn't do that, I'd knit a back panel of my own design using some of the motifs from the front. I did some more colouring in, by hand this time:

And off I went. I managed somehow to knit it a repeat and a half too long (moral : you really shouldn't drink while knitting, especially while casting on). I also, despite having the same number of rows, had a piece that was about 2 centimeters narrower than the front. I know how to fix this, of course,  which is with a massive fudge of picking up and knitting a few more rows each side, while swearing and drinking Rioja:

Both these pieces were knit in the round with steeks, steeks don't really want to unravel when knit in sticky Shetland yarn, but these also included a fair bit of less sticky Rowan felted tweed and were looking a bit fragile.  I decided it was a bit risky to sew them together raw, so I did a 'steek sandwich' (Kate Davies very lovely way of neatening the ends up) on all four ends, before sewing them together:

I made a lining to hold the stuffing out of a piece of cotton, and put it in before stuffing the pillow with some raggedy fleece not really fit for spinning:

This way I can get it stuffed to optimum effect, and not strain the sewn up edge at all trying to get a ready stuffed pillowform inside the cover.

All sewn up, finished, very comfy too!: 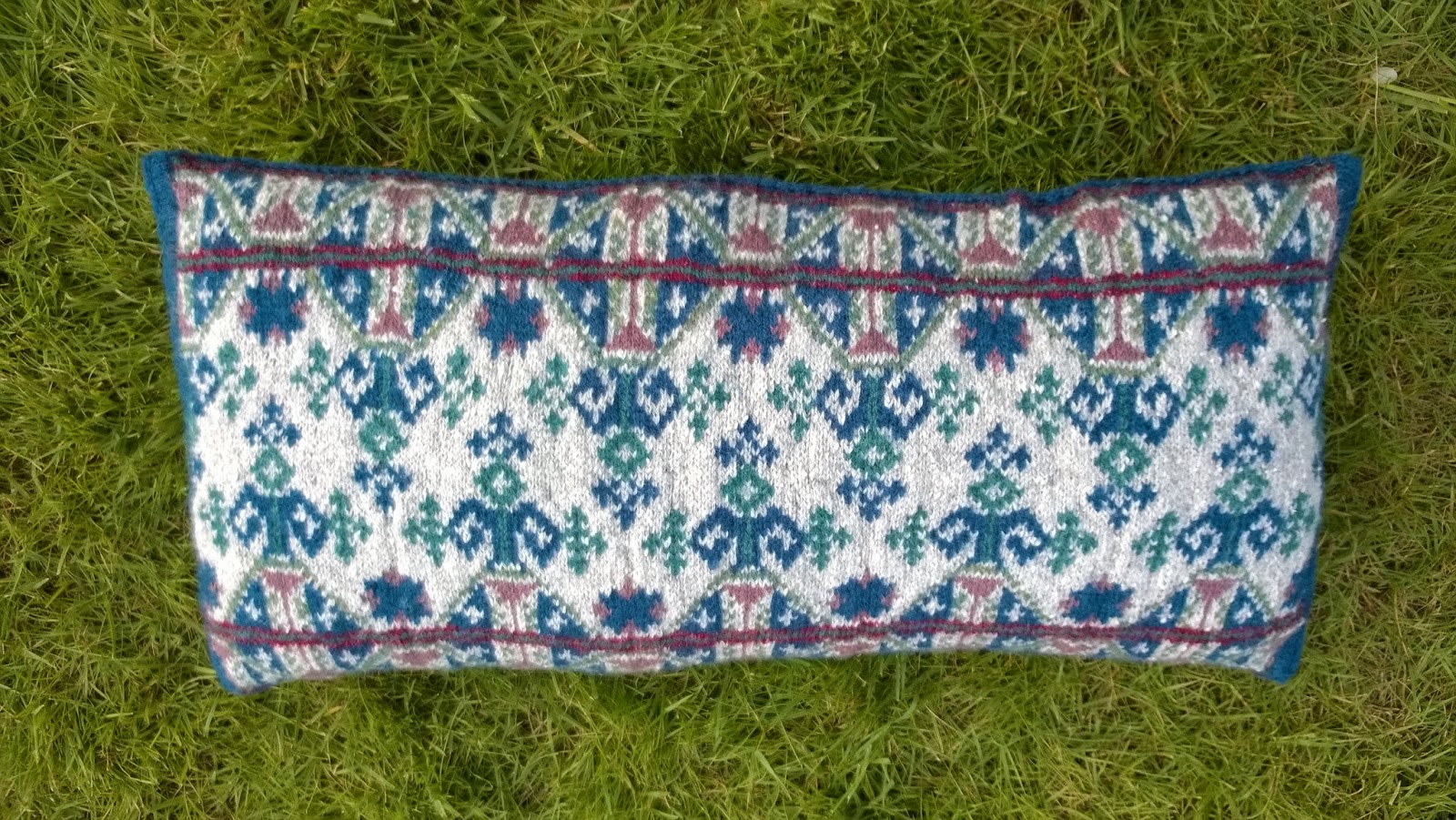 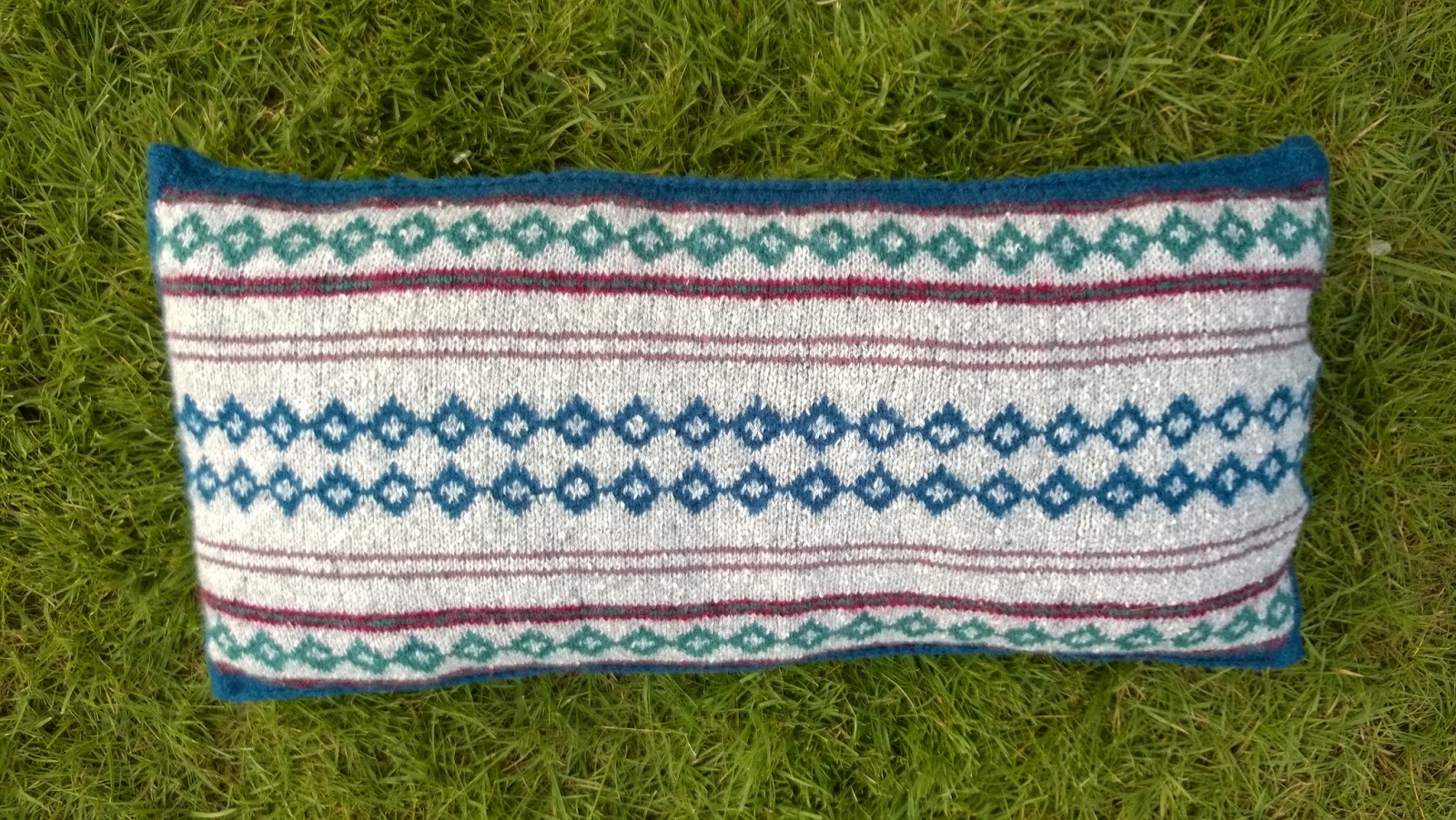